A comprehensive travel management solution for your business to save time & money at every step - from reservations & management to reporting & reconciliation. 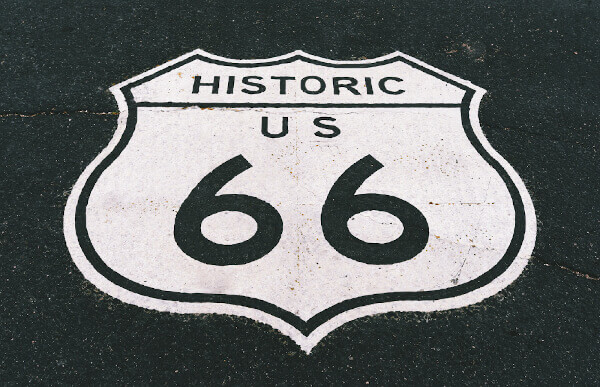 Established in 1926, Route 66 was not only one of the oldest highways in the United States, it is also the most famous. While it is no longer a highway, it is considered a “historic byway” and many people continue to travel the route. Running from Chicago to Santa Monica, "Historic Route 66" offers spectacular scenery, historic attractions, and excellent dining and hospitality options to travelers.

Route 66 is famous for several reasons:

1. As one of the original highways built in the United States, it ran from Chicago to Los Angeles, connecting many rural, local, and state roads in the process. It allowed for the transportation of goods, and people, from the Midwest to the Western United States.

2. Route 66 has been depicted multiple times in popular culture, most famously in the jazz song “Route 66” by Bobby Troup. (Fun fact: Bobby Troup later went on to star as Dr. Joe Early in the hit 1970s television show, Emergency!.)

3. While Route 66 was decertified as a federal highway, it still sees a lot of traffic. Preservation societies have been formed to inform the public of Route 66’s historical importance and to promote its attractions.

Things to See on Route 66

For many travelers, particularly truck drivers, one of the best aspects of traveling Route 66 is the scenery. Once you get into the southwest, you’ll have a chance to enjoy our country’s magnificent desserts.

If you opt to begin your trip in Chicago, do seek out one of the historic Route 66 signs in the downtown area. Combine a visit to The Art Institute with a sign photo op: You can find a “Begin Route 66 Sign” at 99 E. Adams Street, which is right across from the museum.

The Painted Desert: The Painted Desert of Indian Wells, Arizona, is a magnificent sight. The area’s rocks are beautifully colored in a range of hues. Try to schedule your visit during sunset for a special treat as sky and land transform to create a dazzling display.

The Gateway Arch: Located in St. Louis, Missouri, the “Arch” is perhaps the Midwest’s most notable landmark. St. Louis is a great city in its own right, and, if you aren’t afraid of heights, it is possible to take a ride to the top of the Arch.

Weatherford Wind Energy Center: The second-largest wind energy farm in Oklahoma is in the town of Weatherford. Across from city hall is an informational display that includes a blade from a wind turbine

Cadillac Ranch — Amarillo, Texas: This public art project consists of 15 Cadillacs that are half buried in the ground. Visitors are allowed to contribute to the project by spray painting the cars with their own tags, graffiti, or artwork (however you define it).

Las Vegas, Nevada: What more can we say? Check out the attractions all along the strip or go old-school and visit the Fremont Street Experience downtown which includes free light shows and live concerts.

Mojave National Preserve: As you enter California, stop to enjoy this incredible natural attraction that features dunes, Joshua Trees, and the Mitchell Caverns.

Interested in making the most of your travels along Route 66? The CLC app can help you save money and find accommodations that meet your needs. Become a CLC Member and download our app today.